I'm all about generative art these days. Today, I present you Metaballs, my latest creation. It is one of those projects that I visualized in my head and managed to pull it off exactly how I imagined it.

Somehow I came up with an idea to generate spheres, smoothly merge them to get organic looking shapes, which then I would slice up and render the outlines. (I ordered a pen plotter and that is the reason I'm focused on producing vector files.) 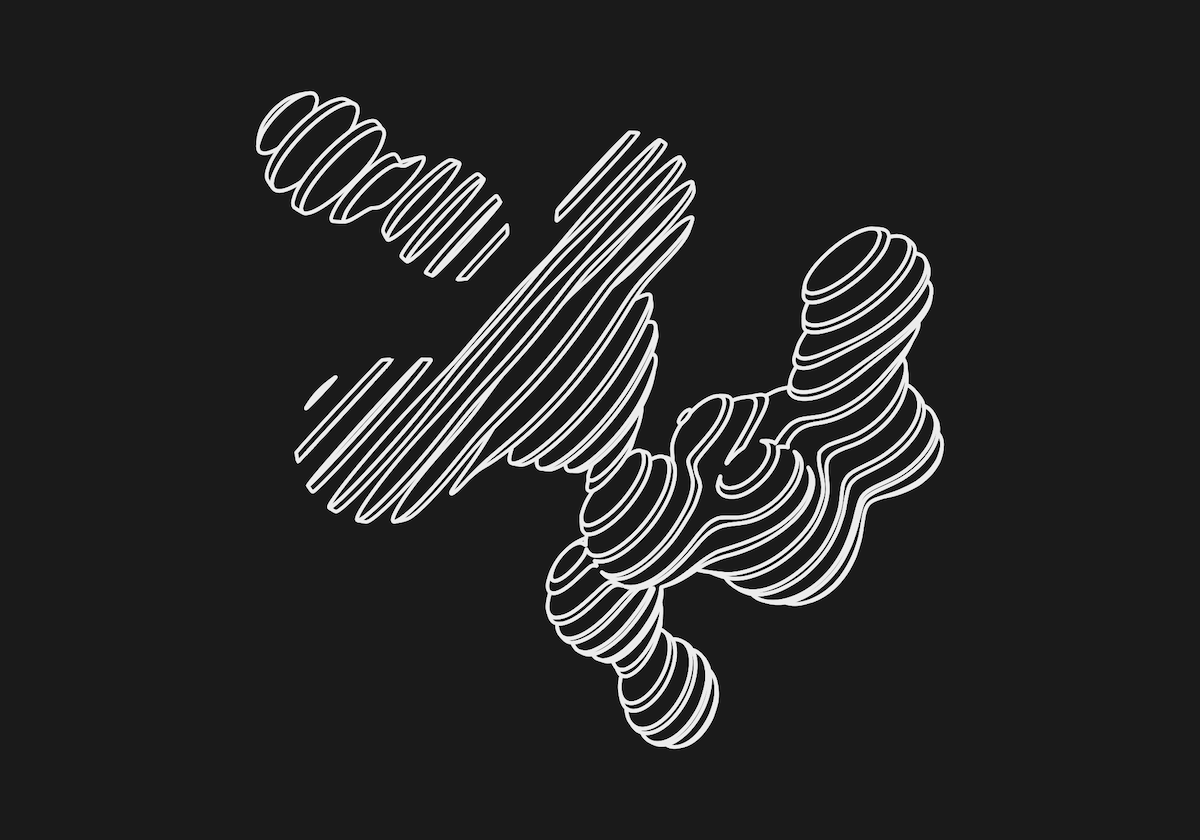 Not sure how I started thinking about slicing these blobby objects, but I had a clear vision of what I wanted to achieve. At this point I had no idea they are called metaballs. I asked on our company's #tech-creative-coding channel, if anyone is familiar with making something like this, and my colleagues pointed out the term metaballs and marching cubes algorithm.

In computer graphics, metaballs are organic-looking n-dimensional isosurfaces, characterised by their ability to meld together when in close proximity to create single, contiguous objects.

Which makes them perfect for what I had in mind - generating organic looking blobs.

Initially I wanted to implement it myself, but I didn't really know where to start. I had an idea to hack it by overlapping two spheres and calculate a curve between them. By rotating this curve, I would create a tube and merge everything together.

It looks ok-ish for two spheres, but I wasn't completely satisfied. And it was impossible do it for more than two spheres. So I gave up early on this idea.

Now I understood how algorithm works, but I gave up on implementing it myself. I was more interested in being creative and playing with the shapes, rather than re-implementing a known algorithm. So I started searching for the existing solution. That's how I stumbled on this demo.

MarchingCubes.js was shamelessly copied and I started creating some blobs.

I love making tools. And for generative art, I love tooling that helps me fine tune the algorithm with immediate visual feedback. (Bret Victor has a great talk on the subject - Inventing on Principle) Tools like this allow me to stay in the zone and see changes real time.

This is the tool I made for generating Metaballs, it is made using three.js and allows me to create shapes in 3D: 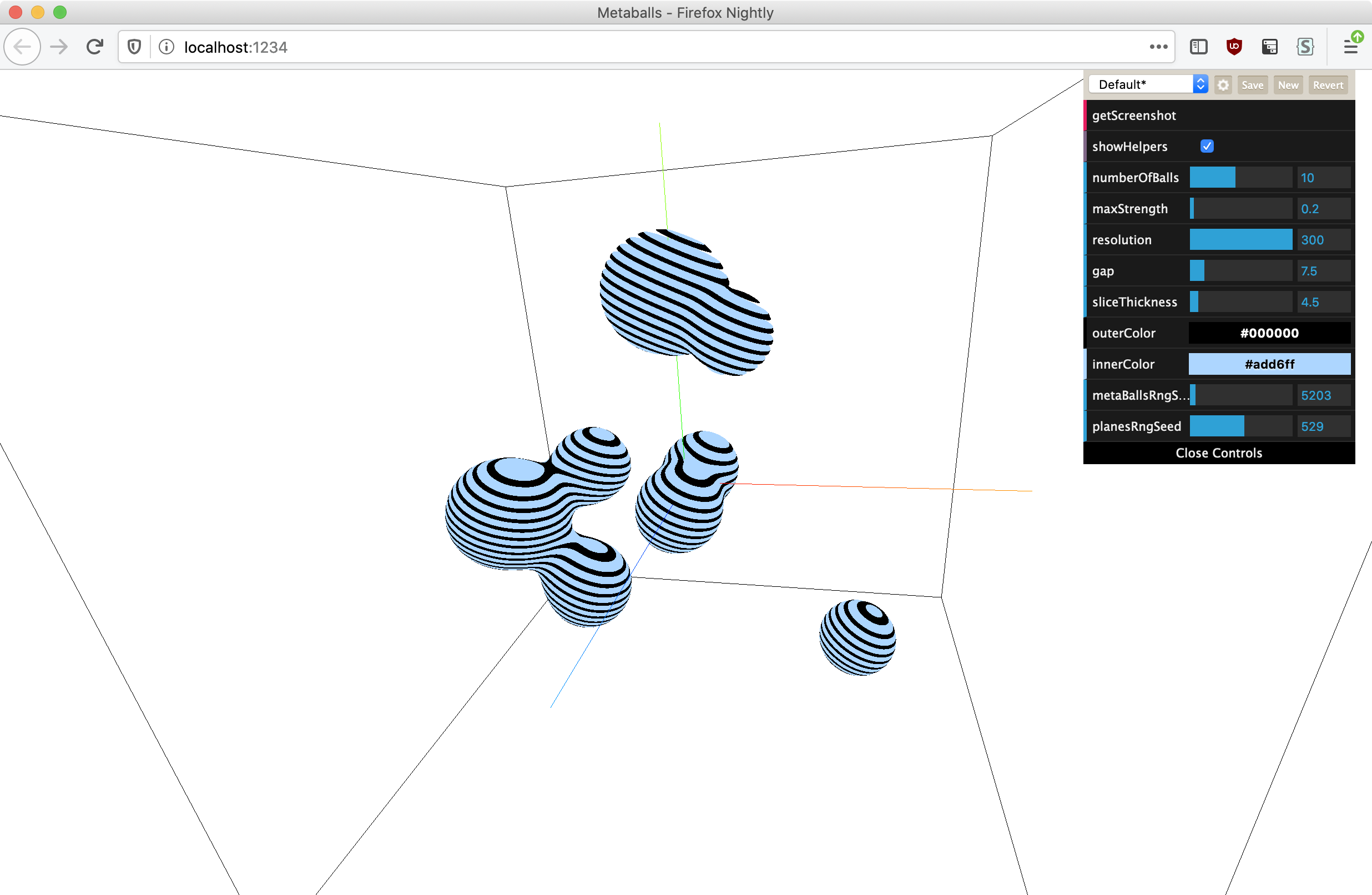 I start by playing with random number generator seeds, until I get something that looks interesting. Then I adjust the number and the size of the spheres. Once I love the shape and the point of view, I spend a lot of time finely tuning all other parameters, until I'm satisfied with the looks.

As the final goal is to pen plot these, I had to convert them to vector files.

I wanted to have thick edges, and cel (a.k.a. toon) shading seemed like a good idea. Apply a shader to the model, grab an image and trace it using Inkscape. (Under the hood, Inkscape uses Potrace to convert raster to vector images.) But it ended up being much harder to pull off then I thought it would, as I didn't have any prior experience with shaders.

And then it hit me! Why would I try to get fat edges in 3D, when I could just trace the object as it is and change edge width once I convert it to vector.

To pull this off, I paint the outer mesh black, and slice surfaces white. I take a screenshot, reverse the colors and take another screenshot. The result looks like this, and the high contrast makes tracing very precise.

Once traced, I check and polish any rogue edges that appeared in the tracing process. And that gives me the final result: 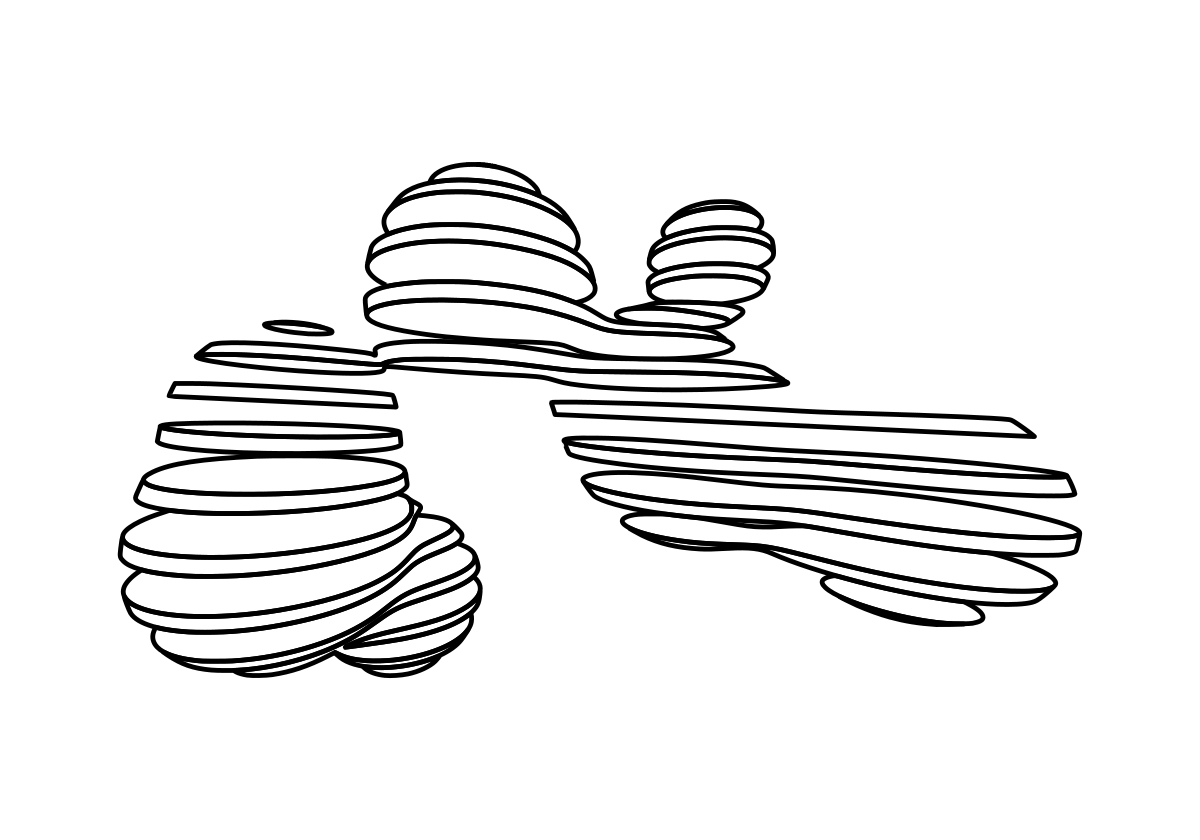 I can't wait for my plotter to arrive to start printing (Couple of my friends already asked for prints :blush:) these.

When I read this post, it sounds like the whole process was smooth sailing. But in reality, I had a lot of back and forth moments and had to learn a lot about working with 3D objects. But it was worth it - it was a lot of fun and I can't be more satisfied with the result.

I plotted this one long time ago, but never updated the post. Better late than never! 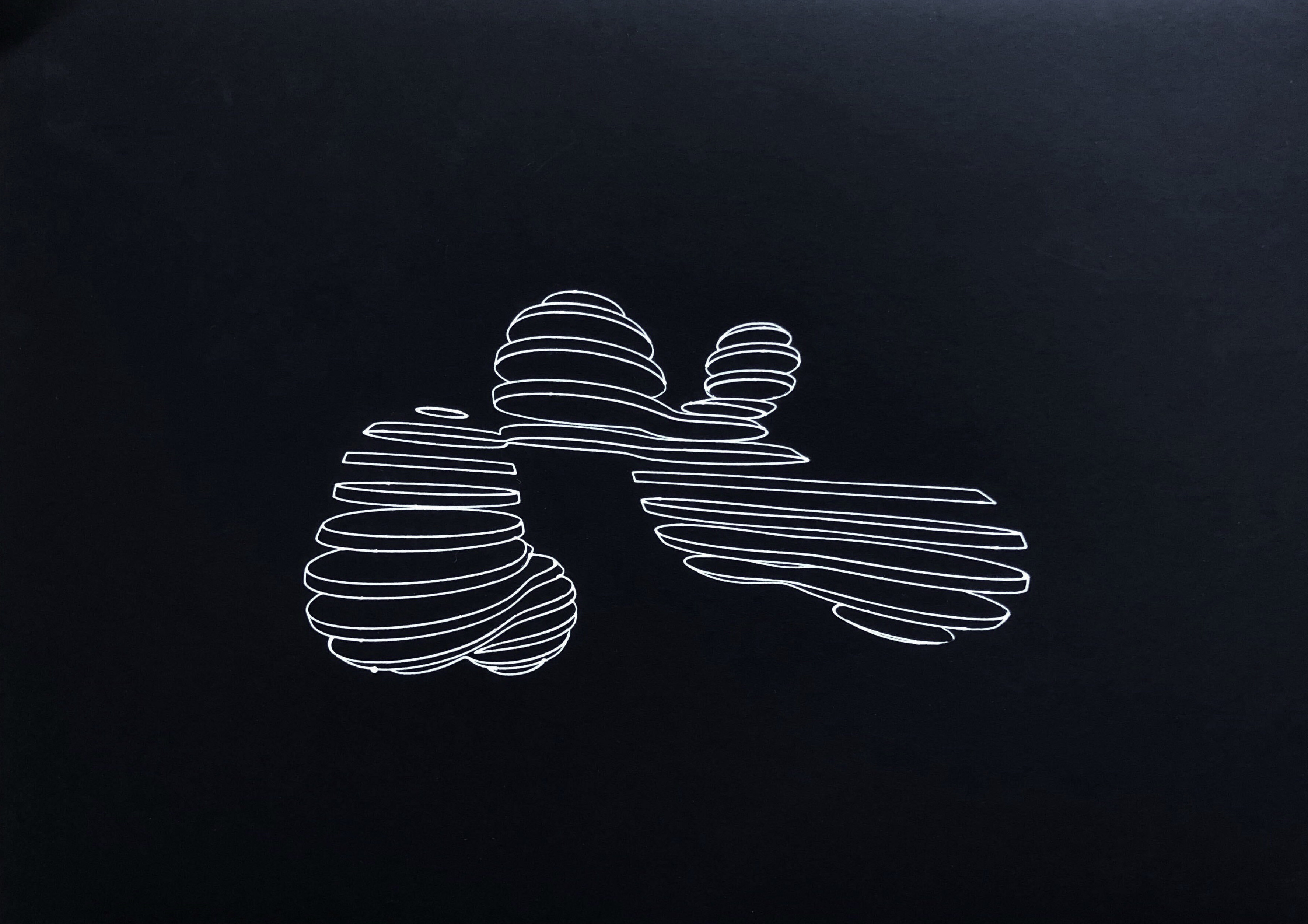 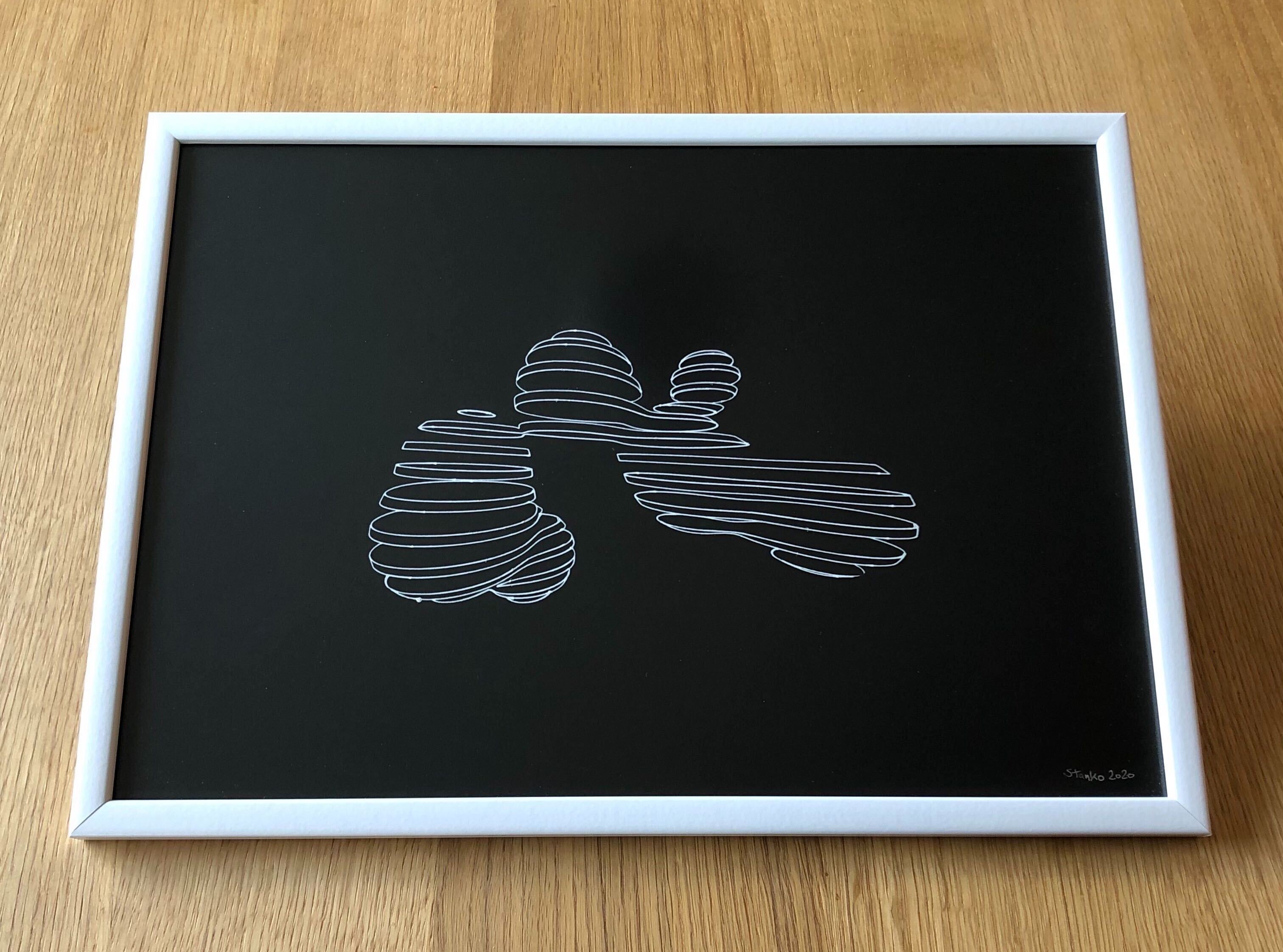